Bear is a delightful notes app whose killer feature is being hashtag-savvy.

If you add a hashtag anywhere in a note, Bear adds the tag to your sidebar. You can even nest these tags for the ultimate in organization while staying as close to flow-state as possible in your writing. Notes can also live in multiple tags at once.

I use Bear for my personal journaling, to plan projects, save interesting quotes and code snippets, write blog posts (like this one) and document my learning over time. It’s a key player in my second brain. 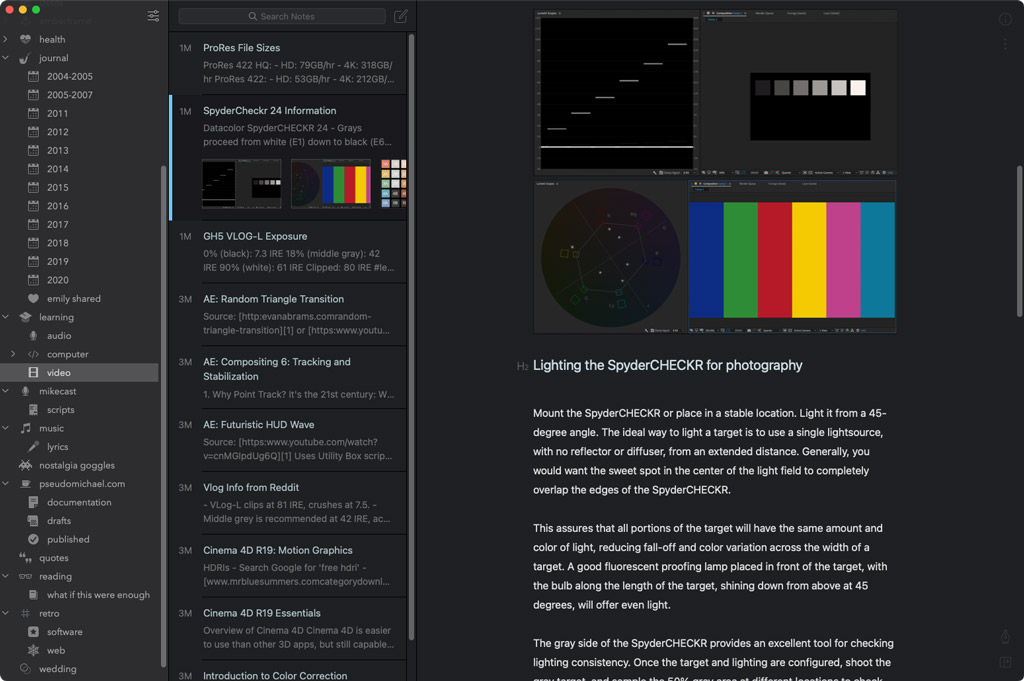 If you’re using Bear to produce writing to be published elsewhere, you can conveniently export your notes into a variety of formats, including MarkDown, PDF, DOCX, HTML, RTF, and JPG.

There are quality competitors out there like Ulysses and a thousand other notes apps, but Bear won me over for striking an amazing balance of features vs. simplicity. The auto-hashtag organization really is a killer app for me and how I think. I’ve tried many apps and just didn’t like them as much. The basic free app is a bit limited but it’s only $15/yr which I think is an amazing value.

Bear is an Apple-centric app, so there are apps for Mac and iOS, but nothing for Android, Windows, or the web. I think they desperately need to create a web client at the very least so I can use my notes library when I’m on my work PC.

Todoist is an app for tracking anything you want to do or remember in your life. You can set up separate projects, create lists with nested comments and attachments, set due dates and alerts, share and collaborate with others, and most recently you can also enable a Trello-style kanban “board” view.

I’ll be honest: I don’t use Todoist to its full extent, but I still enjoy having a solid cross-platform app (which is the main reason I don’t just use Apple’s built-in Reminders app).

I switched to Pocket Casts from Overcast.fm awhile back as my preferred podcast app. Why? For its native apps and an amazing cross-platform web client. 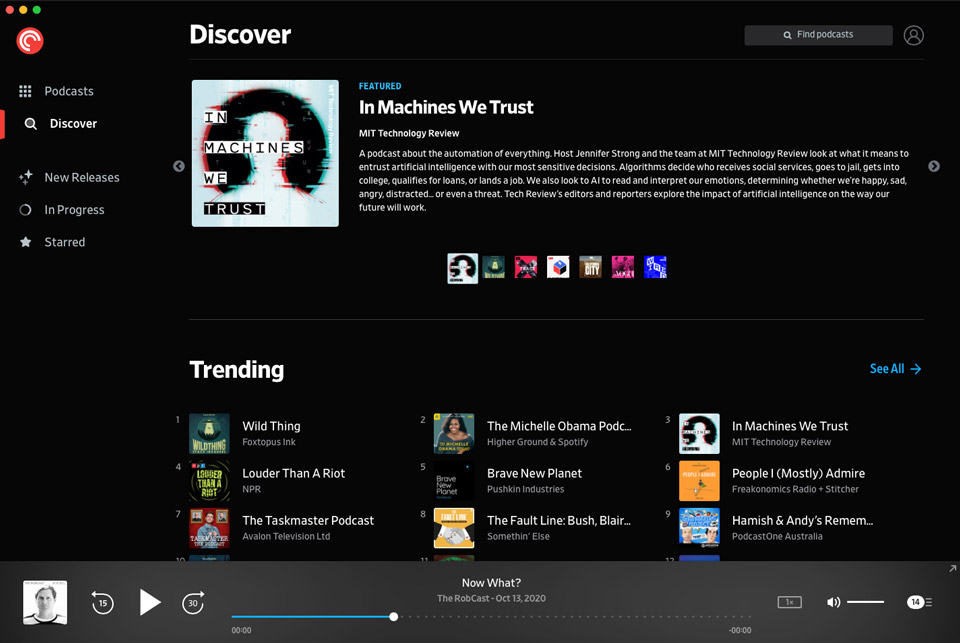 No matter what device or platform I’m on, I can stream my shows and sync listen positions.

So, I have a touchbar mac. Thanks, I hate it. 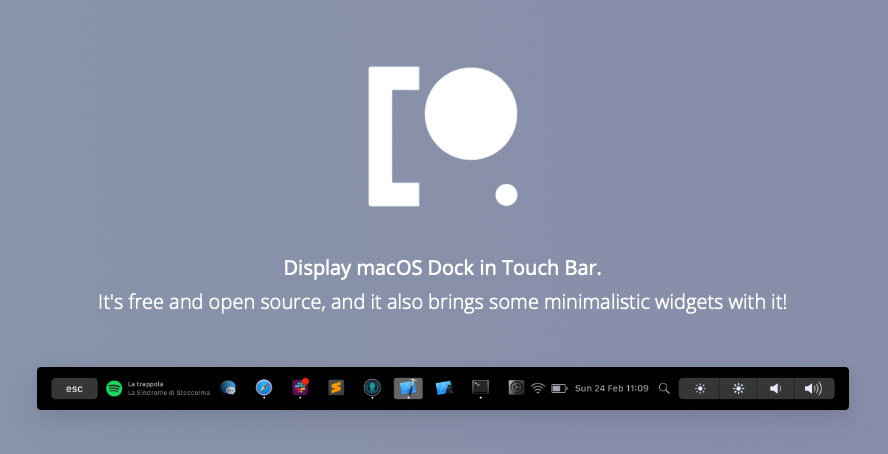 I use Pock to display a clock, battery level, a music widget, and my full Dock (which is hidden on my main display). I can still toggle function keys if I need them, but overall I enjoy the touchbar as glanceable information more than a clunky touch screen.

Amazingly, macOS doesn’t come with a clipboard manager! You get one slot to copy and paste from, and if you accidentally copy twice in a row, your first thing is gone! Windows has a built-in clipboard history capability, but on my mac I went ahead and acquired Pastebot. 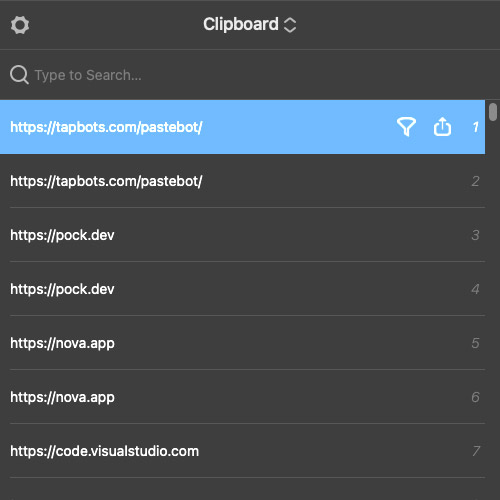 Now if I’m copying and pasting several snippets of information in a row (e.g. gathering a ton of links together), I can do all the copying, and then go to my destination and open Pastebot to paste each item in a row.

No need to hop back and forth a million times.

Espanso is a text-replacement tool. It allows you to type little codes that automatically expand. For example, if I type mpm, Espanso kicks in and expands it to mike@pseudomichael.com so I never have to painstakingly type out my email address.

You can get even fancier with the replacements, like involving clipboard content, using date formats, setting a cursor position, or calling out to a script. 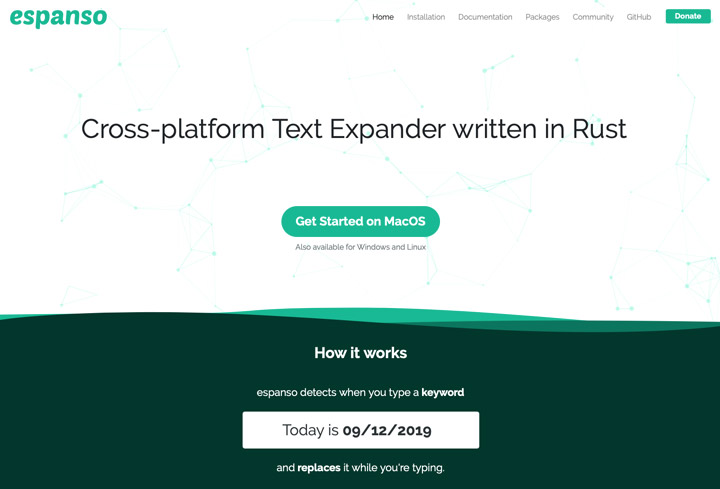 One of the killer features for me is being cross-platform. My Espanso setup can seamlessly sync between mac and windows so my muscle memory text expansions go with me whatever computer I am on.

Espanso is a free, open source alternative to apps like aText or TextExpander.

Jekyll is a blog-aware, static site publishing command line tool. It takes simple markdown text files and generates a complete website. The result is an extremely small and nimble website like this one, which I can host for around $1/mo on NearlyFreeSpeech.net. Lovely!

Effectively using a tool like Jekyll required me to learn more about controlling my computer from the command line. On macs this was through the Bash terminal shell for the longest time, but starting with macOS 10.15 Catalina, Apple switched the default shell to Zsh. I’ve been forcing myself to learn it lately.

Alongside Jekyll, I also use Git to manage my website. Git gives me two main things: version control as I make changes to my website, and the ability to deploy changes to my remote server with a git push command. A script on the server builds my new site anytime there is a new “version” (aka a new post or a revision). It’s so smooth I can even do it from an iPhone app like Working Copy.

As someone who isn’t a developer full time, these tools were intimidating at first, but it’s been a lot of fun teaching myself how to more deeply use my computer.

Sublime Text is a code-focused text editor with developer-friendly features like syntax highlighting. As I said before I’m not a full-time developer or anything, so some of the more advanced features are lost on me, but I do enjoy this app as a very responsive, fast editor for scripts, markup, and stylesheets.

Other popular apps for code editing would be Atom and Visual Studio. Those seemed very powerful, but also like a sledgehammer when I only needed a scalpel. They are good free options, though.

Panic, a mac-centric developer, also just unveiled Nova this year, which may be of interest. It’s kind of hard to imagine paying $99 for a code editor when the aforementioned options are free1, though.

I despise the official Reddit client. It is too bulbous, with a gaudy “card” interface, it is somehow more busy and yet shows me less. Apollo seems sleeker and easier on the eyes. 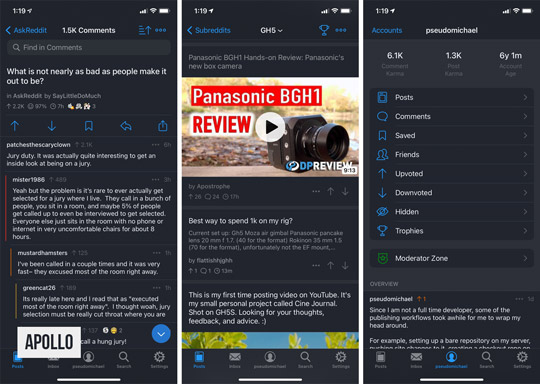 But the real sin is going to any reddit post in a mobile browser. It so desperately wants to throw you to their official mobile app that it makes you tap through several modals just to read a thread. BUT EVEN BEFORE THAT you realize you’re looking at an AMP page and not even the direct reddit site. Hate hate hate. 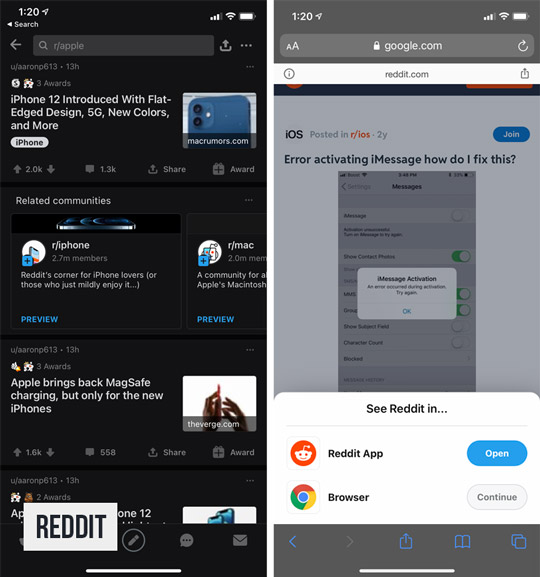 It’s hard to get away from Adobe Creative Cloud if you do graphics or video work. Whether it’s Photoshop, Illustrator, After Effects, or Premiere, Adobe has managed to cement themselves as a really great collaborative default in so many creative spaces.

This doesn’t mean I’m a fanboy. Not at all. Sometimes I hate Adobe’s apps, but they are kind of part of the permanent landscape, it seems. It also isn’t to say that there isn’t fierce competition coming for them. I hear so much these days about DaVinci Resolve for video, and Procreate for drawing and digital painting.

Still, I can’t imagine using anything other than After Effects at some point in my video pipeline, whether creating text animations, graphics, or finalizing a look even if other apps were involved in the process.

What apps do you rely on the most? Anything I should definitely check out? Hit me up on Twitter with your favorites!