An iPad for your thoughts

Ever since Apple unveiled the 2018 revamp of the iPad Pro, with chinless bezels, a magnetic attach-and-charge Pencil v2, and a USB-C charging / data port, I’ve wanted to own one.

Still, I held off for a couple years until I could really think through my use case and narrow down the angry sea of potential accessories to line up a setup that makes sense to me.

So this week, I bit the bullet and put together the following iPad “kit”, which I will explain piece by piece: 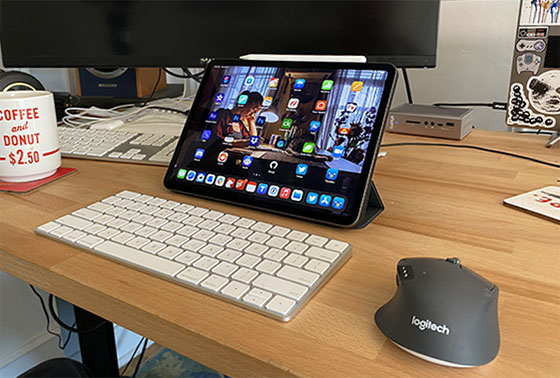 cAn It RePlAcE a LaPtOp?

I couldn’t be less interested in buying an iPad and then meticulously trying to replicate a laptop experience. I own a 15” MacBook Pro that I continue to find great joy in using. That use case is covered.

An iPad as a laptop replacement is a misguided nonstarter for me. And at this point, the conversation about it is one of the most tired in tech. iPads are bad laptops.

I know what I want out of an iPad. I want to be able to hold it comfortably in one hand, standing up, or lounging on a couch, or easily set down on a spot on the kitchen counter while I reference a recipe. 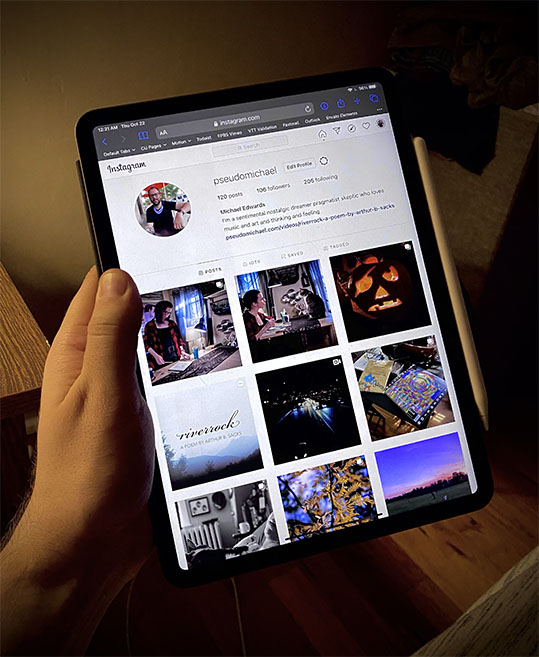 I want to smuggle this surpisingly powerful computer into contexts beyond where my laptop goes. I want to comfortably slide my iPad into the pocket sleeves of small bags.

I want an ambiently available computer that is nearly as available as my phone is, with great battery life, amazing stability, and that is fun to use.

In 2015, I owned the first 12.9” iPad Pro. It was a gargantuan, ridiculous novelty, The pencil was a step forward for artists (even if dragging plastic on glass is less than inspiring), but so many other aspects of the iPad experience were still huge papercuts, the software wasn’t mature yet, etc. 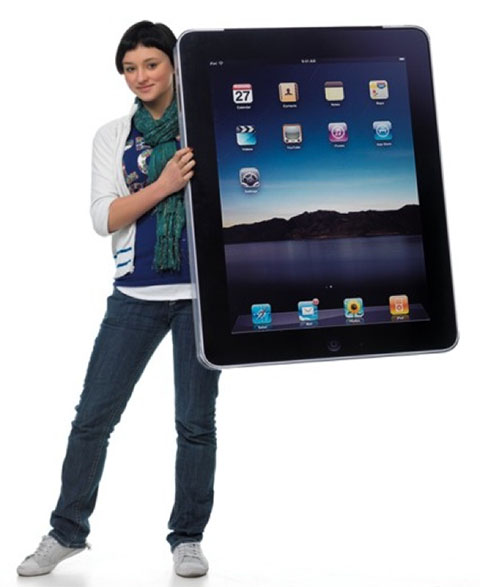 Today, choosing between the 11 and 12.9 wasn’t hard for me, though from surveying the YouTube Review Intelligensia, I feel like an outlier.

It was always going to be the 11” for me, if I got an iPad at all. Because I want the maximally portable tablet experience, not a compromised, heavy, crap-laptop one.

Why not an iPad Air?

This one is easy: I wanted the 120hz screen and the additional RAM. The benchmarks of the Air’s A14 chip edging out the 2020 Pros on some single core tests didn’t make me flinch much. The iPad is already a speed demon that rarely flinches, and the extra RAM will benefit me more in apps like Procreate by enabling more layers.

Don’t get me wrong, the new iPad Air looks like an amazing value for anyone interested in getting a solid iPad. Apple packed a surprising amount of the Pro’s features into it along with a hot new chip. I just knew that the 120hz screen and RAM would matter to me, and that even if the 2020 Pros weren’t really a speed bump from the 2018s, they are still absolute beasts.

What if Apple unveils monstrously better iPad Pros in a couple months? That’s fine. Tech always advances. I already knew that this experience is the one I wanted, and someday years down the road I’ll update again. Tech moves on.

Not that Magic Keyboard

Earlier this year, Apple released a shockingly expensive keyboard case called the Magic Keyboard. These $300+ attachments are right in line with the “try to make this a laptop” direction I couldn’t be less interested in. They seem awkward to me: they make the iPad “system” heavier than many laptops, top-heavy, small trackpad, no function row, and poor adjustment angles. 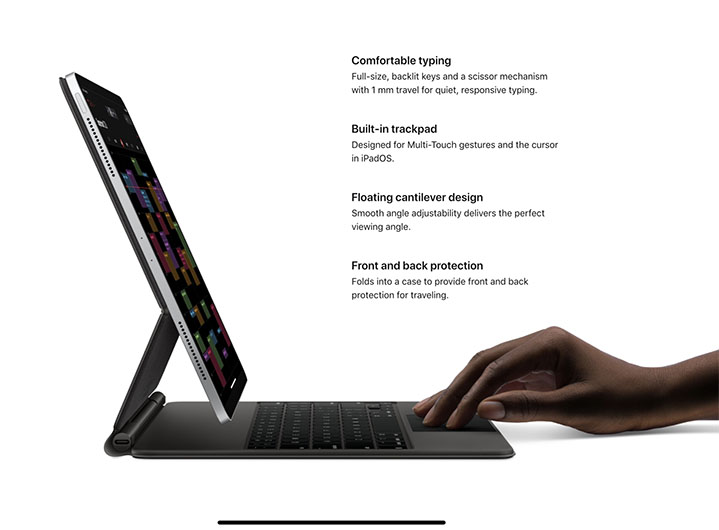 Nonetheless, typing is a use case I want to enable, in the right place and time. The original desktop “Magic Keyboard” is my chosen solution. I already know I love the way this keyboard feels, and I know that there will be times that I do want to type blog posts and journal entries on my iPad, or simple website coding (layouts, stylesheets, etc).

Unlike Apple’s iPad-centric keyboard cases, this keyboard still has media/function keys. I don’t have to remap CAPS LOCK. Though, let’s face it, I still do because WHO NEEDS CAPS LOCK EXCEPT TERRIBLE PRESIDENTS?.

This keyboard lasts months without needing a charge, and I can switch it off and still easily stow it in most bags for travel. It’s extremely light. 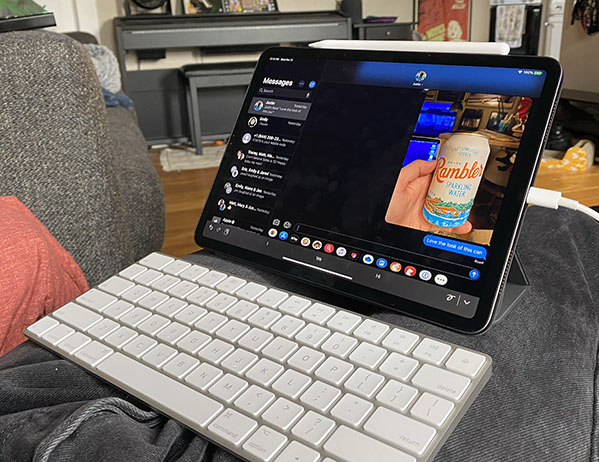 I don’t want a keyboard permanently attached to my iPad that literally doubles the weight and creates a top-heavy mess with poor adjustment angles. That’s what the new Magic Keyboard cases really are to me. That’s a bad laptop.

There are definitely cheaper bluetooth keyboards than this one, but it’s still way cheaper than the iPad keyboard cases.

You could practically see confetti fall from the sky when Apple announced cursor support for the iPad. I’ve been trying it out this week.

So far, it’s…. fine. I’m glad it’s here, because we have 35+ years of computer history showing us that cursors are good, and as the iPad gets more and more robust, complex software, it will come in handy.

Nevertheless, using a mouse in iPadOS is surreal. Maybe it’s because Apple was stubborn for nearly 10 years about this. Maybe it’s because it feels goofy sending a big circle around the screen. I do like how the cursor snaps to button targets in many apps, though I could see desktop-centric fans recoiling in horror. 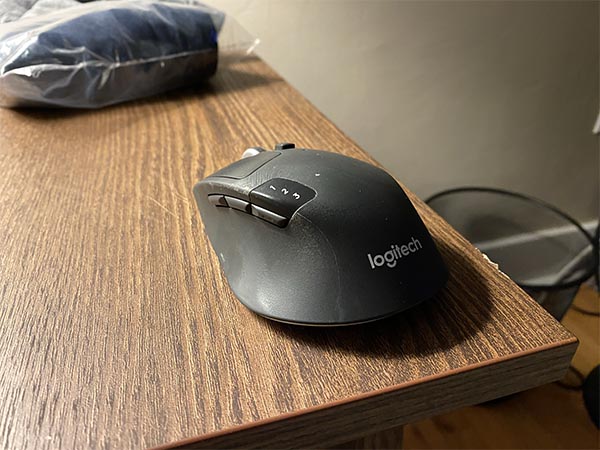 I had a Logitech 720 Triathlon mouse sitting around, which allows you to program 3 different paired devices which you can toggle between.

The internet didn’t really need another “I got an iPad!” blog post, but I don’t care. I do really enjoy the focused writing experience and the drawing capabilities.

Maybe before too long Apple will unlock some of the last remaining doors to this curious computing experience: the ability to code without rube goldberg machines of VNC and SSH. Or, maybe cloud computing will get so good we won’t care about living vicariously through a thin client.

Until then, I’m going to enjoy the hell out of this little guy. 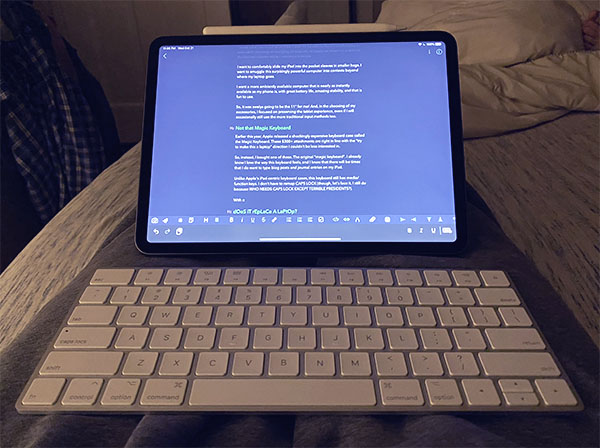