Micro.blog recasts many of our now-familiar social media concepts in the spirit of open indieweb principles

About six months ago, I bailed on most of the traditional social media platforms I had accounts on.1

My “retreat from social media” has not really been about leaving social media as a general concept, but about owning my own content2, reducing my exposure to invasive ad tracking, and opting out of these platforms that exist on top of a data social contract that I have grown to largely disagree with.

These days, I connect with people primarily through more secure and private channels. I do not deny some initial trepidation about FOMO3 in leaving Facebook, but largely I’ve found the ghost stories about being left out if you’re not on Facebook to be pretty unfounded. I have amazing real friends I still interact with through technology in countless ways that don’t rely on giving up all my online behavior to Twitter and Facebook.

Being part of an open web that imagines a wide variety of possibilities for social media is exciting. Some of the newer experiences we’ve seen are still on top of proprietary platforms, like Slack and Discord, but others are decentralized and open protocol driven, such as upstart, don’t-call-it-a-Twitter-clone Mastodon.

Over the past year an intriguing project born out of Kickstarter called Micro.blog has caught my attention (and which I’ve joined and pointed to the micro subdomain on my site.4 Micro.blog is a service that embodies many IndieWeb principles. The core service resembles Twitter in that you post short bits of content and follow other users, but with some notable design and privacy differences. 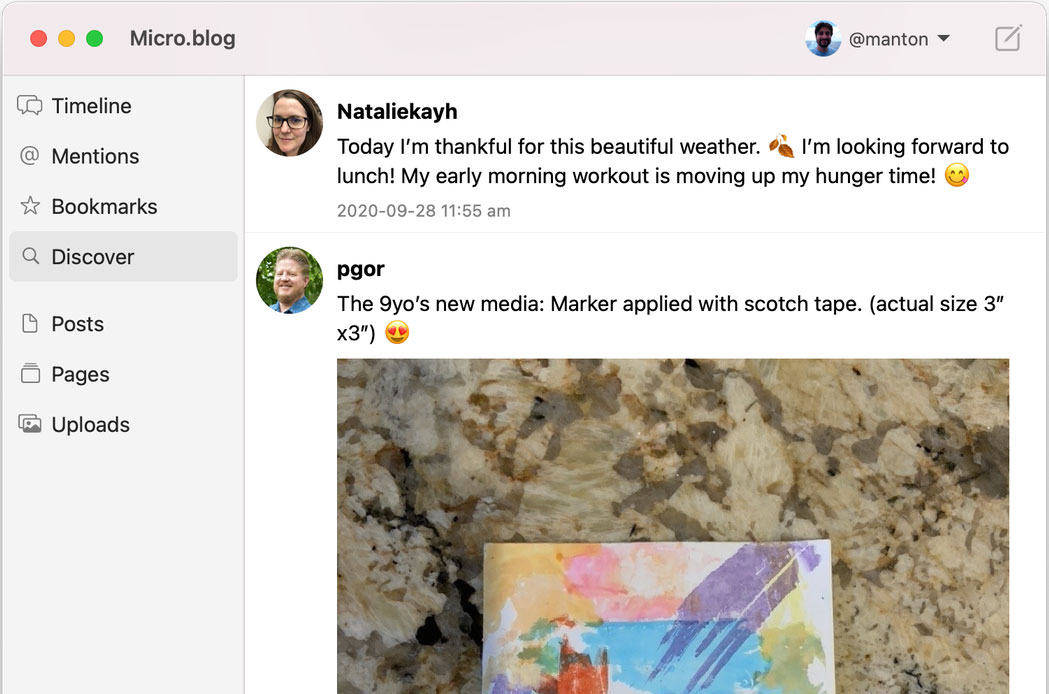 For starters, there are no ads or tracking. But that’s just table stakes these days for me. A few other interesting tidbits: Favorites are private for your own collection of content and don’t notify the original poster. There isn’t a lazy button to like things without contributing something (there is a reply button, though).

You can view who people are following, but not who is following you. This means people are not incentivized to blindly follow-back anyone.5

This design is not an accident. Micro.blog creator Manton Reece has talked about demoting lazier forms of interaction, and promoting more substantive interactions. In other words, if you want people to know you liked something: tell them! I don’t necessarily have as strong of an opinion against like buttons and favs, but I can respect a design that de-emphasizes them.

The service also embraces “Tagmoji” above hashtags, as described in this post by Jason Burk. In short, instead of a sea of #s blanketed over posts (like on Instagram), very specific emoji are used to tag certain content types, like 📷 for photos, or 🎵 for music. These “tagmoji” are used to inform Micro.blog’s discovery feature, which is currently the prime way to discover other users.

Micro.blog provides hosting for a small fee which you can point to your own domain name (as I have done), or self-hosted folks can still connect their independent blogs to it over micropub protocols.6

The service is still pretty new, and thus still growing up in terms of userbase but also the maturity of the tech behind the service. There are ongoing developments to improve accessibility, discovery, and the richness of the content possibilities itself, but it definitely feels like an enthusiastic early adopter phase right now. They recently launched iOS and Mac apps for reading and posting posts and images, but it still feels a little bit like a 1.0 of the platform, if I’m honest.

All in all, Micro.blog recasts many of our now-familiar social media concepts (posts, @-mentions, follows) in the spirit of IndieWeb principles while also rejecting some others (hashtags, retweets, or other lazier forms of participation). It encourages users to contribute in substantive ways, users who want to own their own content, users who want a different kind of social media.

Benefits of the open web over your skepticism

People who don’t have their own Micro.blog can still view all of my content as what it really is: just a stream of posts on my website. They can subscribe with any RSS reader, and don’t have to give up any data or join any platform to view it. Damn straight!

Just in case you feel a shadow of skepticism coming across your face about this latest wave of social media technology that clearly I’m enthused about, consider that everything I do on a service like Micro.blog ends up actually just being blog posts full of text, images and links that I own and publish to my website. The social features are an open layer on top that people can connect with without having to join a monolithic platform.

In other words, if I want to leave and join a different service, everything I am doing here is 100% portable. And people can connect with me. The way it should be!

This is a much better way to live in a world of social media, methinks!